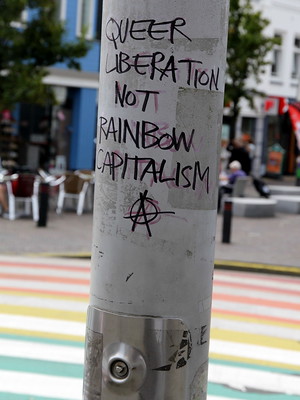 When Capitalism Got Woke: The Hypocrisy of Corporate Virtue Signalling and the emergence of Rainbow Capitalism

To the backing track of gentle piano music, a transgender boy goes about his day- to- day life being called by his deadname ‘Gemma’, the continual misgendering chipping away at him. Until, at Starbucks, the barista asks his name and he can finally tell us it is James. The advert ends with a peaceful scene of people sat in Starbucks, while James walks past the window, coffee in hand. The advert screams, in all senses except the literal, ‘Starbucks: an accepting idyll for all.’ The advert, understandably, touched many people, who were excited by trans representation and a heartfelt slogan: ‘Every name’s a story’. This advertisement, however, is one in a long line of corporations jumping on the bandwagon.

Starbucks’ trans employees have protested the hypocrisy of this advert. They tell stories of deadnaming (Starbucks refuses to update employees’ name until they have a legal name- change), misgendering, being outed, and having difficulty accessing gender- affirming medical treatment through their health insurance policy.

Similarly, in 2019, an advert was released. While a gentle acoustic cover of Wonderwall plays, two young girls grow into young women and fall in love. I find it heart-warming, yet I am also aware that it is exploitative. As a lesbian, I have noticed the upturn of adverts featuring lesbian couples, always shoehorning in a kiss, an act that for lesbians is already so exploited by the sex industry and the male gaze is now similarly appropriated by businesses in order to sell cars or coffee. WLW relationships continue to be stigmatised and utilised, after being overly sexualised for decades, they now additionally face commercialisation. Renault, like many other companies, would like to present themselves as an ethical choice, they want to exhibit that they care. Yet, in 2012 the French court of appeals found Renault guilty of gross negligence after 3 employees committed suicide in 2006 and 2007. A further 35 Renault workers committed suicide in France in 2008 and 2009, many ascribing the blame to their work.

In Neoliberalism and Contemporary Literary Culture, Mitchum Huels and Rachel Greenwald Smith write that in the 4th ontological phase of neoliberalism (which Henry Giroux describes as ‘a more virulent and brutal form of market capitalism’): ‘what used to be matters of political belief and social justice—racial inequality, gay marriage, transgender bathroom access—are now wholeheartedly endorsed by corporations committed to whatever proves best for business.’ Companies make use of social issues, taking on the guise of ‘wokeness’ because, in the current zeitgeist, this is the most profitable strategy. Far from being concerned for the welfare of minorities, companies are entirely profit- focused and, acknowledging the rise of acceptance of and concern for minorities, see an opportunity to milk sales. It is easy to be on the right side of history when it pays.

Amazon, in 2019, released an advert in the US to recruit more workers. The advert is not as blatantly heartwarming as the aforementioned two. There is merely some lighthearted music and some interviews with Amazon employees, saying how happy they are at Amazon, praising the medical insurance coverage, free tuition fees and trans- friendly policy. The word trans uncomfortably echoes throughout corporate advertising, the struggle of real people twisted into an advertising ploy. This advert is among many that depict Amazon as a happy, healthy place to work. The reality could not be more different.

In September 2019, Billy Foister, a 48 year- old Amazon worker, lay on the warehouse floor for 20 minutes, dying of a heart attack. While Amazon announced they responded “within minutes”, footage shows that it was, in fact, 20. While days previous, Foister had been apprehended within two minutes for placing a product in the wrong bin after management spotted the mistake on camera, no member of management came to help while he lay dying. Billy Foister unfortunately passed away. The National Council for Occupational Safety and Health have listed Amazon in their ‘Dirty Dozen’ list of the most dangerous US employers. Unbelievably, coworkers of Foister were commanded to go back to work after watching their friend and colleague die. They were allowed no time to mourn, to process what they saw, to weep, they were told to pretend that nothing had happened. They can completely dismiss this real trauma, trauma that unfurled on its warehouse floor, but continue to capitalise on abstract trauma, predominantly that of LGBTQ+ people at large.

The guise that Amazon cares for its workforce is not just dishonest, its heinous. While Jeff Bezos, Amazon’s CEO, is praised for donating $100 million to American food banks (a relatively miniscule amount of his net worth), US data shows thousands of Amazon employees rely on food stamps. It is cheaper for Amazon to make an ostensibly sizeable donation than it is to stop their workers from starving, and it is better for PR too.

There is undeniably a disconnect between the public image which companies put out and the reality. We view corporations through a fractured mirror, the light retracted and diffracted so we can no longer see the true image, if the light even reaches us at all.